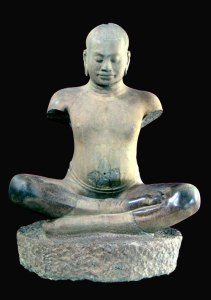 Respectively, during the early 13th century Jayavaraman VII had ruled his kingdom known as the Khmer Empire in the mainland of the Southeast Asia;

While during the 14th century, Sejong assumed the throne known as the king of Choson Dynasty in the Korean Peninsula. These two men were highly respected by his populations as the great moral kings as they have left many priceless achievements and legacies behind. Interestingly, the legacies of both men briefly have three significant similarities that inspired people to value him as the moral kings. They are people-oriented, development-oriented, and socio-cultural oriented.

Both of them were respectively the leaders who had ruled his nations by establishing the kingdom of people-oriented. In this regard, a famous inscription of Say Fong enshrined that, “He [Jayavaraman VII] suffered the illness of his subjects more than his own; because it is the pain of the public that is the pain of the kings rather than their own pain.” [1] A century later, another similar concepts was found in Korea said by Sejong,  “The common people are the foundation of any country. It is only when this foundation is strong that a country can be stable and prosperous.” [2] Generally, the meaningful and grandiloquent words are easily spoken, but harder to put it into practice. Nevertheless, at the ancient time or even now, any concepts introduced by the kings or leaders would simply come into force or translate into practical policies for his officers and his subjects to follow through. In this connection, the above saids would mean unambiguous messages that would possibly come up with a wide range of policy makings. At the same time, it would also reflect the sincere determinations with a great care of these men regarding to the social welfare and the daily lives of his grassroots.

More importantly, both of them also strongly emphasized on the developments of his countries. There is a study which indicated that “Jayavaraman VII also embarked on a major public-works program, building roads, schools and hospitals across the empire.” [3] While during Sejong’s reign, “Governing with compassion and wisdom, Sejong laid the foundations … leading Korea into an extraordinary era of cultural and scientific progress, unmatched by any other nation of the day.” [4] On one hand, being a ruler, one shall be basically and widely recognized by the people under its authority to officially obtain the legitimacy. On the other hand, being a great moral leader, he or she would not only need to retain the acceptance from the people, but also need to erect enormous achievements for its populations’ interests as a way for earning its legacies. Therefore, as many concrete efforts had been realized during their reigns, people would be undoubtedly moved by their earnestness and their achievements, both of which would inevitably become the reasons to inspire people to regard them as the great moral leaders.

Last but not least, another superb accomplishment among these kings was the socio-cultural improvement which remarkably bolstered the high level of people’s happiness and prosperity. In reign of Jayavaraman VII, “With regard to the arts, the king was responsible for the construction of numerous temples in the Angkor region and in other provinces.” [5] In this case, building such wonderful temples, it had already illustrated the prosperity of people as only prosperous nation could afford large capitals, human resources, high techniques, large skilled labors, diversified cultures, and excellent arts to build them. Additionally, happiness or prosperity of ancient people could be also observed through the diversifying skills to make things and advancing of art materials. In this regard, the evidence has shown that in the Choson Korea,  “King Sejong was a great lover of music, and from his relationship with Pak Yon, the most talented musician of the Choson Dynasty, came many of the great advances in the music of 15th century Korea.” [6]

The ultimate goal of people’s lives is not just for having enough foods to eat and having enough clothes to put on, but it goes far beyond the basic demands. Thus, providing happiness, harmony, and prosperity would be obviously the reason that inspires the whole population to value the leadership style of any ruler as a moral leader. From this perspective, as these two men had brought people to realize their dreams, till nowadays people therefore name them – Jayavaraman VII and Sejong – as the great moral kings who had established their kingdoms as heaven on earth.

This entry was posted on April 1, 2016 by KHOV EA HAI in Uncategorized.